We won and we lost. This will be a long, long fight.

This week, voters in Colorado and North Dakota defeated ballot measures that would have established separate rights for fertilized eggs, embryos, and fetuses. Pregnancy Justice was able to develop and disseminate key information making clear how these measures would hurt all pregnant women, whether they were seeking to have an abortion, go to term, or experienced a pregnancy loss.

Through op-eds, videos, and fact sheets, local meetings, numerous interviews with the media, and many collaborations in Colorado, especially with Colorado Organization for Latina Opportunity and Reproductive Rights (COLOR), Pregnancy Justice helped expose the reasons why Colorado's Amendment 67 would undermine the personhood of pregnant women.

Pregnancy Justice's intersectional analysis helped bring the support of groups such as Drug Policy Alliance to the "No on 67" campaign. Our work showed that the first women likely to be arrested if Amendment 67 passed would be those already most vulnerable to state control and punishment: low-income women, women of color, and drug-using women. And indeed, we feel we succeeded in exposing that Amendment 67 would not, as its proponents claimed, "protect pregnant mothers," but rather would provide grounds for their arrest. That is why we supported this billboard ad: 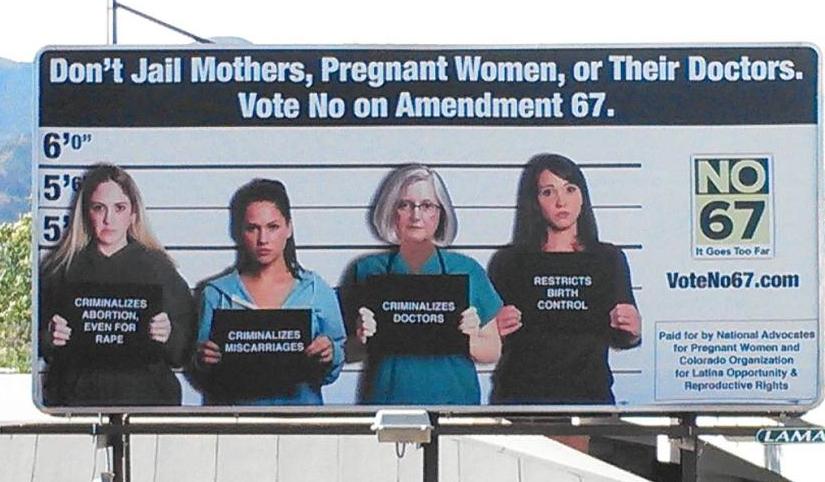 Our efforts also contributed to the defeat of Measure 1 in North Dakota. This measure was variously known by its supporters as the "Life Begins at Conception," "Inalienable Right to Life," or the "Human Life" amendment. As our commentary in Talking Points Memo explained, more appropriate names for this measure would have been "A Right to Life . . . Unless you are Pregnant" Amendment or possibly, the "You Can Kill a Pregnant Women in an Attempt to Save a Fetus" Amendment. It was squarely defeated despite, as this story explains, the considerable investment of resources from the North Dakota Catholic Conference and the fact that the campaign was headed by Frank Schubert, the political consultant most notorious for orchestrating California's anti-gay Prop 8 campaign.

Unfortunately, voters in Tennessee passed Measure 1, a state constitutional amendment that appeared, on its face, to narrowly focus on abortion. As Pregnancy Justice's Farah Diaz-Tello and SisterReach's Cherisse Scott explained: Tennessee's Amendment 1 should really have been understood as a referendum on the personhood of pregnant women.

The outcome of the elections in Colorado, North Dakota, and Tennessee confirm Pregnancy Justice's insights and the wisdom of our long-term strategies. When we can make clear a measure will hurt all pregnant women, we can win. When attacks on abortion are responded to only as attacks on that one procedure and not the status of all women, we will continue to lose.