Thank You! Bei Bei Shuai is Free and More! 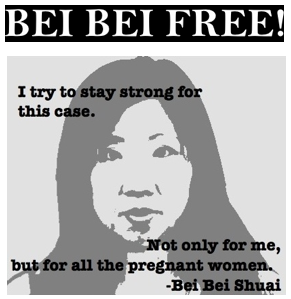 After two and a half years, Bei Bei Shuai - an Indiana woman who was charged with feticide and murder for attempting suicide while pregnant - is finally free: free from a looming murder trial, free from the electronic GPS shackle that has tracked her every move since her release on bail from the Marion County Jail, and free from an unjust and legally unauthorized prosecution.

With your help, Pregnancy Justice has played a significant role in the case through legal advocacy, public education, and ongoing collaborative grassroots and national organizing.

Faced with enormous public pressure - including a flood of­ more than 100,000 emails through Change.org from people in Indiana and around the world demanding that all charges be dropped, student-led protests outside the Marion County Jail and in the prosecutor's office, a major demonstration in downtown Indianapolis, educational forums including one on mental illness, pregnancy, and public health, and critical media coverage and op-eds - the prosecutor offered Ms. Shuai a plea agreement. This agreement would drop the feticide and murder charges and allow her to avoid a lengthy trial that was expected to attract widespread media attention.

On Friday evening, Ms. Shuai pled guilty to the Class B misdemeanor of "criminal recklessness." She was immediately freed. The official sentence of 178 days in jail was already far exceeded by the year she spent incarcerated without bail plus the more than 365 days on bail during which there were severe limitations on her freedom including constant state surveillance and supervision. Although the State of Indiana should never have put Ms. Shuai in the position of having to plead guilty to any crime, we are thrilled that, with your support, she is now free to move on with her life. This plea does not set legal precedent for future prosecutions, and we hope the massive public opposition to this prosecution will act as a political deterrent to new efforts to misuse Indiana's laws to police and punish pregnant women.

We commend the excellent work of Ms. Shuai's trial attorneys - led by Linda Pence and the team at Pence Hensel, and Kate Jack, former Staff Attorney at Pregnancy Justice - who have stood by Ms. Shuai from the very beginning. We honor the more than 80 medical, public health, and advocacy organizations and experts who appeared as amici (friends of the court) calling for dismissal of the charges. We salute the local Indiana activists - including Butler University students and professor Dr. Brooke Beloso, the Indiana Religious Coalition for Reproductive Justice and members of Law Students for Reproductive Justice - who have tirelessly advocated for justice for Ms. Shuai and all Indiana women. But most of all we stand in awe of the courage and resilience Ms. Shuai has shown as the state of Indiana has pursued this cruel and wrongful prosecution.

Unfortunately Ms. Shuai is not the only woman in the United States who has been subjected to wrongful prosecution in relation to her pregnancy. In spite of Ohio Supreme Court case law established in 1992 that rejected the use of criminal child endangerment laws to punish drug-using women for giving birth, Ms. Astasia Clemons was arrested and charged with the crime of "Corrupting Another with Drugs" after giving birth to a healthy baby who tested positive for controlled substances. She was sentenced to two years in prison. The "Corrupting" law was passed to punish people who furnish drugs to others or force them to become addicted. The prosecutor nevertheless argued that Ms. Clemons, "by force, threat, or deception" caused her unborn daughter to use a controlled substance, likening the same processes by which a pregnant woman nurtures and sustains her baby to an act of force. As a result of Pregnancy Justice's diligent case tracking methods, we learned about the prosecution and reached out to her public defender. Working with the Ohio State University Mortiz School of Law Civil Litigation Clinic, we filed an amicus brief on behalf of over two-dozen experts and organizations to inform the court that treating women as though they are "corrupting" their children by giving birth to them is not only absurd but also dangerous as a matter of public health.

After deliberating for over a year (but within only a few months of our joining the case), the court ruled in Ms. Clemons's favor, refusing to create absurd results and overturning her two-year prison sentence. Pregnancy Justice is working with local public defenders to use this ruling to help free at least six other Ohio women who are serving prison terms or who are on probation on the same wrongful charges.

These cases represent just a few of the consequences of legal precedent that would treat fertilized eggs, embryos, and fetuses as if they are persons entirely separate from pregnant women and, as a result, permit an extremely punitive and unequal system of law for pregnant women.

Thank you for your help in challenging such efforts and for your support in making these victories possible.