Something to Celebrate: Hoosiers Rally for Bei Bei Shuai 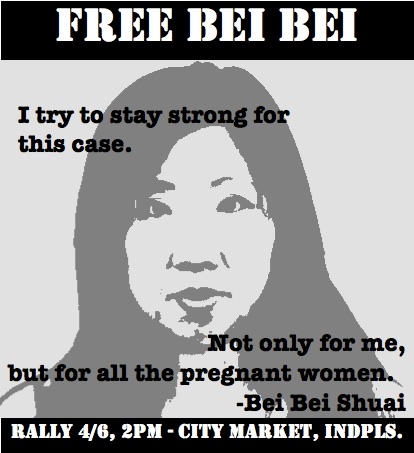 On April 6, 2013, more than 100 people rallied in Indianapolis, Indiana in support of Bei Bei Shuai and against separate and unequal law for pregnant women. Reported widely and well, this rally demonstrated the strength of local and state based activism and how a national organization (Pregnancy Justice!) successfully supports local action without appropriating it.

In 2010 Bei Bei Shuai attempted suicide while pregnant. Although she survived, the baby she gave birth to following the attempt did not. Instead of receiving support, Ms. Shuai was arrested on charges of murder of a viable fetus and attempted feticide. If this prosecution is upheld, it would effectively create a "personhood" measure in disguise, establishing precedent for subjecting all pregnant women to a second-class status.

While Pregnancy Justice continues to work in the courts and with policy makers, it is becoming more and more apparent that this is not enough. And that is exactly why activists and leaders in Indiana recognized the need for direct action in support of Bei Bei Shuai and against separate and unequal laws for pregnant women.

Student activists and professors from Butler University and Indiana University-Purdue University Fort Wayne (IPFW), law students at the Indiana University-Bloomington Maurer School of Law and IUPUI McKinney School of Law, Indiana Religious Coalition for Reproductive Justice (IRCRC), and the team at Pence Hensel LLC are just some of the individuals and groups committed to freeing Bei Bei Shuai who worked tirelessly to make the rally a success.

While historic rallies and marches may have seemed to naturally emerge in response to outrageous state action; they didn't just "happen." In fact they came about as a result of intensive organizing, outreach, education, and inspiration. So that is what Pregnancy Justice and Indiana activists set out to do through everything from producing powerful and striking posters, flyers, and pins to extensive outreach and education efforts.

The week before the rally, Laura Flanders interviewed Pregnancy Justice's Executive Director, Lynn Paltrow for GRITtv about the Bei Bei Shuai case and the upcoming rally. Lynn then flew to Indiana where local advocates had organized a series of talks in Fort Wayne, Indianapolis, and Bloomington enlisting support for Bei Bei and the rally.

Momentum built as local media began announcing the talks and reporting on them. In "Advocate visits to back Shuai," the Indianapolis Star gave Bei Bei Shuai the last word: "I try to stay strong for this case," she said. "And not only for me, but for all the pregnant women." In the week leading up to the rally, Pregnancy Justice, IRCRC and other local Indiana groups publicized the rally on their websites, Facebook pages, on the rally's Facebook page, on their Twitter feeds, and with the media. Local newspapers, the Indiana Lawyer (announcing that law students from the IU Maurer Law School would be attending the rally), independent news outlets, the national Associated Press (AP) wire service, and radio stations spread the word about the rally. On the morning of April 6th, IRCRC's Carolyn Meagher did a 6:00 am live interview at the rally site for WISH TV.

The effort was worth it. On the day of the rally, more than 100 people showed up, including four Law Students for Reproductive Justice Fellow (one of whom is a native Hoosier) who drove all the way from Washington D.C. This, however, was a rally primarily organized by, for, and about people in Indiana -- a vital fact given that the local prosecutor in the case had said previously that he didn't believe there was significant local opposition to the prosecution.

Rally signs identified the scores of leading medical, public health, and advocacy organizations that oppose the prosecution. Speakers at the rally included local ministers, feminists, doctors, psychologists, students, lawyers, and activists including Amy Shackelford, executive director of Central Indiana Jobs for Justice. Ms. Shackelford read a statement in support of Bei Bei Shuai from Eve Ensler -- author of the Vagina Monlouges and founder of V-Day: a global activist movement to end violence against women and girls.

Coverage of the event was about as good as it gets: including everything from AP, and the Indianapolis Star to Ecumenical News, television coverage, and numerous on-line tweets, Facebook postings, and blogs. The coverage accurately credited the local organizations and organizers that had made this event happen and reported that the participants were from all over the state of Indiana. Now the prosecutor knows that there is significant local and state-based opposition -- and it is not going away!

Nor are the more than 200 activists who attended the third annual Oklahoma Take Root: Red State Perspectives on Reproductive Justice Conference supported by Pregnancy Justice, or the many, many people we know -- whether they define themselves "pro-life" or "pro-choice" -- who do not want to see pregnant women locked up, tied down, or deprived of their personhood.

PS Watch Pregnancy Justice's home page next week for speeches from the rally!