NEW YORK — Today, Pregnancy Justice shared its first-ever annual impact report, highlighting a year of legal wins for people facing pregnancy-related criminal charges, the successful training of thousands of professionals on how to confront and reject pregnancy criminalization, the release of groundbreaking reports that moved the needle, and much more — even amid the loss of Roe. 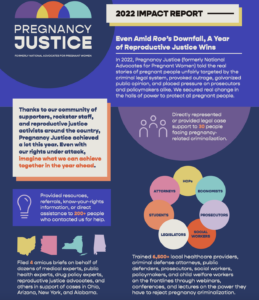 In 2022, we freed people from jail, told the real stories of pregnant people unfairly targeted by the criminal legal system, provoked outrage, and placed pressure on prosecutors and policymakers alike.

With only three full-time staff attorneys, Pregnancy Justice achieved a lot and made an outsized impact thanks to dedicated staff and supporters.

This isn't just Pregnancy Justice's impact; it's our supporters' impact, too. They powered the work of our attorneys and research staff who answered calls, represented clients, wrote legal briefs, and produced publications that were widely cited.

We look forward to continuing the fight for the humanity and dignity of pregnant people in the year ahead.