Chelsea Becker Is Released On Her Own Recognizance, But Not Yet Free 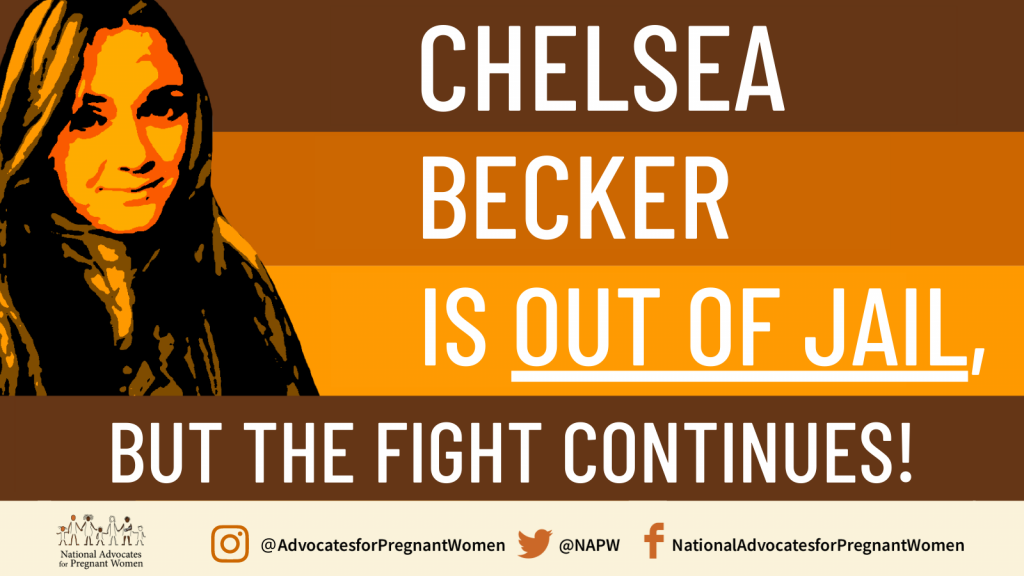 On March 9, 2021, Kings County Superior Court Judge Robert Shane Burns granted Chelsea Becker’s request to be released on her own recognizance so that she can enter a residential treatment facility, but her legal fight continues.

In 2019, Ms. Becker experienced a stillbirth, which Kings County District Attorney Keith L. Fagundes claims, without scientific basis, was caused by methamphetamine use. DA Fagundes brought murder charges under the state’s murder law, despite the fact that the law itself states that it cannot be used to prosecute the “mother of the fetus.” Since November 2019, Ms. Becker has been held in jail on $2,000,000 bail. This misuse of California law contradicts the recommendations of every leading medical group, including the American Medical Association, the American Academy of Pediatrics, and the American College of Obstetricians and Gynecologists, all of which oppose the use of the criminal law to address pregnancy losses and issues involving pregnancy and drug use.

“We are relieved that Ms. Becker has been released and can continue to fight these charges from outside of jail,” states Samantha Lee, Staff Attorney, Pregnancy Justice. “These charges should never be brought against any person for experiencing a pregnancy loss. And because California law does not authorize this prosecution, we will soon be filing an application to have Ms. Becker’s case dismissed altogether. We will also continue to fight against the DA’s flagrant misuse of his power and the dangerous medical misinformation he is promoting through the prosecutions of Chelsea Becker and Adora Perez.”

Since 1992, Kings County District Attorney Fagundes is the only prosecutor in the state to use the state’s murder law against women because of pregnancy losses. In 2018, DA Fagundes also prosecuted Adora Perez for murder because she experienced a stillbirth. Because Ms. Perez’s counsel failed to challenge the legitimacy of the prosecution, Ms. Perez was encouraged to plead guilty to manslaughter of a fetus (an offense that does not exist in California). She is currently serving an 11-year sentence.

California courts have consistently ruled against prosecutors who have tried to use California’s murder law as a basis for arresting women who terminated or lost their pregnancies. Since 1973, these courts have all held that the state’s murder law may not be used as a basis for charging a woman based on her own pregnancy loss regardless of the alleged cause of the loss.

For more information or to set up an interview with legal counsel, please contact: Shawn Steiner, Media and Communications Director, Pregnancy Justice | 347.943.8148 | SCS@advocatesforpregnantwomen.org.