I learned that Justice Ruth Bader Ginsburg had died when Rabbi Sharon Kleinbaum announced this loss at the end of Rosh Hashanah high holiday services at CBST. My wife and I “attended” services by zoom. Like most of you reading this email, we were devastated, not only by the loss of this extraordinary woman, but also by the new threat to the survival of our constitutional democracy now that there is the possibility of another Trump appointment to the U.S. Supreme Court.

Over the years, and primarily because of the Women’s Law and Public Policy Program, I have had several opportunities to be in small meetings and seminars (tea) with Justice Ginsburg. One of these times was immediately following a Supreme Court oral argument on a case I had filed, helped to try and continued to work on after starting Pregnancy Justice; Ferguson v. City of Charleston. We won that case with Justice Ginsburg among the six-member majority. That was the case challenging the Medical University of South Carolina’s policy targeting Black pregnant patients and secretly searching them for evidence of drug use. If they tested positive, hospital staff turned their confidential medical information over to the police and coordinated their arrest. These patients were taken out of the hospital in chains and shackles, some still pregnant, others still bleeding from just having given birth. While the holding of the Supreme Court decision is typically squeezed into a narrow legal box, I think of it as one that stands for the broad proposition that all pregnant patients, including Black ones, are fully protected by the 4th Amendment’s prohibition on unwarranted searches and seizures.

As many people know by now, in her early years, Ruth Bader Ginsburg brought the challenge that resulted in the Supreme Court's first decision recognizing that the Fourteenth Amendment's equal protection clause applies to women and prohibits discrimination (at least sometimes) on the basis of sex. That case, Reed v. Reed, successfully challenged an Idaho state law that specified that "males must be preferred to females" in appointing administrators of estates. The decision held that the law's preference for men was arbitrary and unconstitutional.

That decision, however, was just the beginning. Justice Ginsburg knew that full protection for women under the equal protection clause would not exist unless the Courts recognized that the Constitution also prohibited discrimination based on the capacity for pregnancy and pregnancy itself. So, she looked for and found a case that would expose and address this discrimination. That case was Struck v. Secretary of Defense.

Susan Struck was serving as a Captain in the U.S. Air Force, when, as a single woman, she became pregnant. The Air Force, however, had a strict rule: terminate the pregnancy or face immediate discharge. It was a perfect case for exposing the scope of the government power to control and coerce women because of their reproductive capacity. Indeed, thousands of women were thrown out of the US military because they continued their pregnancies to term.

Although Ginsburg lost her challenges to the policy in the lower federal courts, the U.S. Solicitor General believed the Air Force might lose in the Supreme Court. As a result, he advised the military to withdraw Captain Struck’s discharge and to change the rule so that pregnancy would no longer be automatic grounds for discharge. That is what the Air Force did, making the case “moot” and preventing it from continuing and being decided by the Supreme Court.

Why do I tell you all this? Because that Court has still not recognized that government efforts to control and coerce women in relationship to their pregnancies and pregnancy outcomes — including abortion — are prohibited by the Fourteenth Amendment’s equal protection clause. It is why so many prosecutors and legislators believe there are no constitutional limits on their power to use pregnancy as a basis for locking-up women. It is why Pregnancy Justice must continue to fight on behalf of so many people including Latice Fisher and Chelsea Becker.

As someone who considers herself a “daughter-in-law” of Justice Ginsburg, I will continue to be part of that fight. And in these times when it is so easy to despair and to focus on division, I ask you to continue to fight not only in memory of Justice Ginsburg, a white, Jewish woman, but also the extraordinary, brilliant Black lawyer and theologian Pauli Murray who developed the legal strategy Ginsburg used to persuade the Supreme Court to recognize that the Fourteenth Amendment’s Equal Protection Clause protects women as well as men.

What can you do to carry on the work Murray and Ginsburg started? Today, contact your Senator (888-521-6658) and say don’t let Trump and McConnell ram through a Supreme Court nominee who doesn’t respect precedent (e.g. Roe v. Wade) and who will vote to rip healthcare away from millions in the middle of a pandemic.

Below please find an update on some of the ways Pregnancy Justice has been continuing the fight and please check out our long-awaited, updated, user-friendly website. 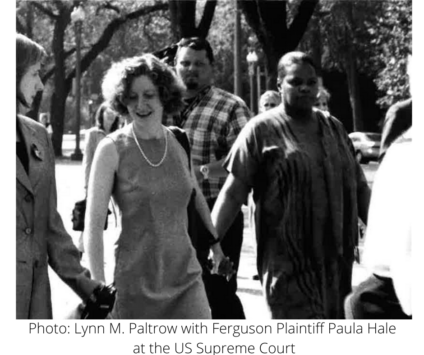 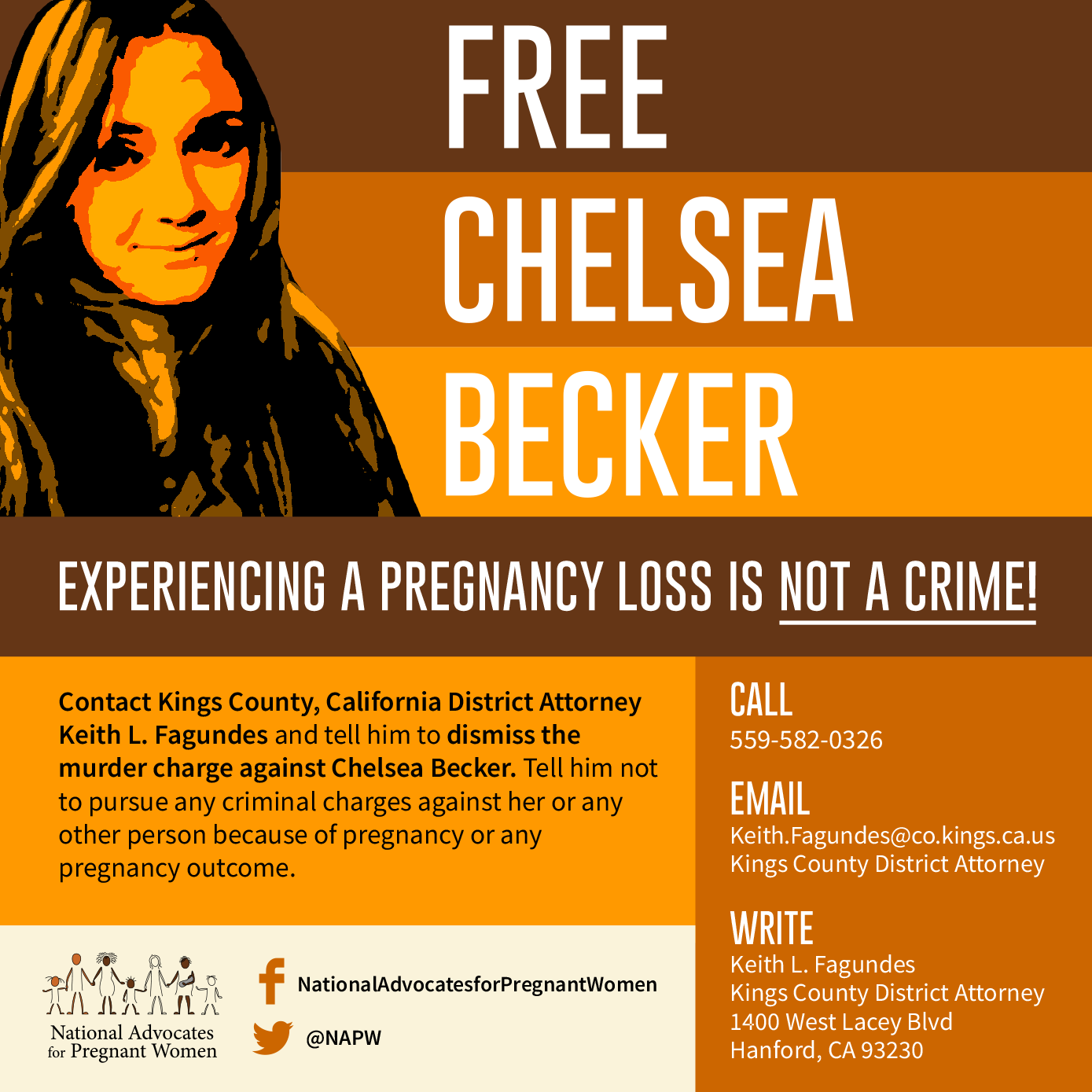 California is a progressive state, yet a District Attorney from California’s extremely conservative Central Valley is dead set on using his authority to make California’s feticide law applicable to pregnant women. When Chelsea Becker experienced a stillbirth, blamed (without scientific basis) on her methamphetamine use, she was arrested and charged with murder of a “human fetus.” The prosecutor did this despite the fact that the law itself prohibits prosecutions of the “mother of the fetus” and even though there have been almost identical cases in the past rejecting the use of the law in this way. Not only does Ms. Becker’s freedom depend on a victory in this case (she has been incarcerated since November 2019 with bail set at the impossible amount of 2 million dollars) but also all pregnant women who, if Ms. Becker loses her case, will be at risk of arrest for murder if they experience pregnancy losses or have an abortion outside of what might qualify as a “therapeutic abortion.”

The trial court has thus far denied all of our motions to free Ms. Becker. We have now appealed those decisions and are amassing ever more support for her while we await decisions in her case. In addition to two amicus briefs, one by the ACLU of Northern California, and the other by the Drug Policy Alliance (on behalf of 16 organizations, including ACOG), we are pleased to let you know that California’s Attorney General Xavier Becerra, the State’s chief legal officer filed an amicus brief on Ms. Becker’s behalf. The Attorney General agrees that California Penal Code §187 does not authorize prosecutors to treat pregnancy losses as murder, and called for the criminal charges against Chelsea Becker to be dropped. According to the Attorney General, Kings County District Attorney Keith L. Fagundes “misinterpreted the law’s intention” and a “superior court was subsequently incorrect in deciding not to dismiss the charge against her.”

Our statement about the brief and ongoing public education efforts in her case, and that of another woman, Adora Perez who was similarly wrongly prosecuted, have gotten significant positive media coverage in the Los Angeles Times, the New York Times, The Daily Beast, and numerous other outlets.

Finally, Pregnancy Justice knows that for real change to occur we must engage in ongoing education and organizing. That is why we hope you will join us on September 24th for our webinar featuring medical experts who will discuss evidence-based research on drug use, addiction, and pregnancy. In addition to the medical experts, local legal and community advocates will offer insight into the current responses to drug use and pregnancy in the Central Valley and approaches that will advance maternal, fetal, and child health.

In Mississippi, Latice Fisher was charged with second degree murder after she experienced a pregnancy loss at home. She reached out to Pregnancy Justice directly asking for help, and we responded immediately. We quickly joined forces with Laurie Bertram Roberts of the Mississippi Reproductive Freedom Fund and Color of Change to help get Ms. Fisher’s bail lowered and released from jail and to put pressure on the prosecutor, Scott Colom, to drop the charge. As a result of an intensive strategy of direct outreach to and education of the prosecutor he decided to nolle prosequi the case and dismiss the murder charge.

Nevertheless, in March of 2020, DA Colom re-presented the case before a new grand jury. But this time, he provided the jury with the accurate scientific information we made available to him. As a result, the grand jury “no billed” the matter. This means that Ms. Fisher no longer faces any criminal charges related to her stillbirth or alleged research about the abortion medication misoprostol. Her case provided the basis for significant public education about criminalization of pregnancy losses, reproductive justice, as well as the work needed to ensure that “progressive” prosecutors, including Scott Colom, keep their word once elected.

Sadly, Oklahoma's highest criminal court recently issued a devastating opinion reversing a lower court's good decision to quash (not permit) a criminal child neglect charge against Kathryn Juanita Green. Ms. Green had experienced a stillbirth that was blamed (without scientific basis) on her drug use. In other words, this decision holds that Oklahoma criminal law provides authority to hold pregnant women criminally liable for the outcome of their pregnancies.

﻿While we are not surprised that Oklahoma joins South Carolina and Alabama in a truly heinous, misogynist expansion of the State’s criminal law, we are extremely disappointed. It calls our attention to some of the particular challenges of Pregnancy Justice’s work including the extraordinary persistence of drug war propaganda and the ease with which our legal system can completely disregard the rights of the humans who get pregnant. Fortunately, this decision is not the end of Ms. Green’s case. She has not yet been tried or convicted of any crime and Pregnancy Justice will be working hard to keep that from happening as her case now goes forward.

Not Letting COVID-19 Stop Our Outreach, Organizing and Education

During this period of all remote work, when we could no longer directly approach student activists because of COVID-19, Pregnancy Justice created and carried out an online webinar series for students. With guidance from Pregnancy Justice, student organizers designed a series of five interactive webinars which connected Pregnancy Justice’s mission with current issues, such as the COVID-19 pandemic, the opioid crisis, and the Black maternal mortality crisis. These webinars included extensive Q and A sessions, interactive “know your rights” scenarios, and thought-provoking discussions with experts.

When Pregnancy Justice staff could not go to conferences, we recorded talks, participated by zoom, and met online to plan major events. We are particularly excited to, once again, be advising and supporting the Take Root: Red State Perspectives on Reproductive Justice annual conference that is now sponsored by the Kentucky Health Justice Network. It will be held in an online, virtual format on October 17 & 18.

We hope you will join us there and everywhere that provides an opportunity to advance reproductive justice and protect our democracy.